Login
Log in if you have an account
Register
By creating an account with our store, you will be able to move through the checkout process faster, store multiple addresses, view and track your orders in your account, and more.
Create an account
Home About Affaire d'Eau & how it all began

About Affaire d'Eau & how it all began

Affaire d’Eau specialises in antique bathroom appliances. We call it ‘forgotten antiques’, antiques that became forgotten, more and more rare and not considered as real antique or valuable by everyone. Over the last 25 years Affaire d’Eau saved hundreds of antique bathes and basins from a tragic end on the garbage dump.

Our collection doesn’t only consists of original claw-feet bathtubs and basins, it also contains bath- and shower tabs as well as many antique accessories. We bring back the old splendor in old bathrooms but we also create new, slightly antique ones.

Our collection old catalogues from the large sanitary firms from the end of the 19th and the beginning of the 20th century is a source of inspiration. Based on these catalogues we can date old pieces and when asked we can assemble an authentic Empire, Victorian, Art Nouveau od Art Deco bathroom. Affaire d’Eau designs bathrooms that revive the past with the comfort of today. In our showroom in the center of Amsterdam you can find sanitary appliances from between 1850 and 1935.

Our collection changes rapidly, in fact most of the pieces are unique and no second one can be found. We try – despite the fact that a lot of items are becoming more and more rare – to keep our collection as varied as possible. If necessary Affaire d’Eau will try to find that one object that’s needed to give a bathroom authenticity.

Affaire d’Eau started in 1993. The plan to start a shop in Amsterdam with antique bathroom appliances was much older but finding beautiful antique bathes or basins turned out not to be easy. A skiing holiday in 1992 in the French resort Le Mont-Dore, near the Puy de Sancy, made our plans more concrete. 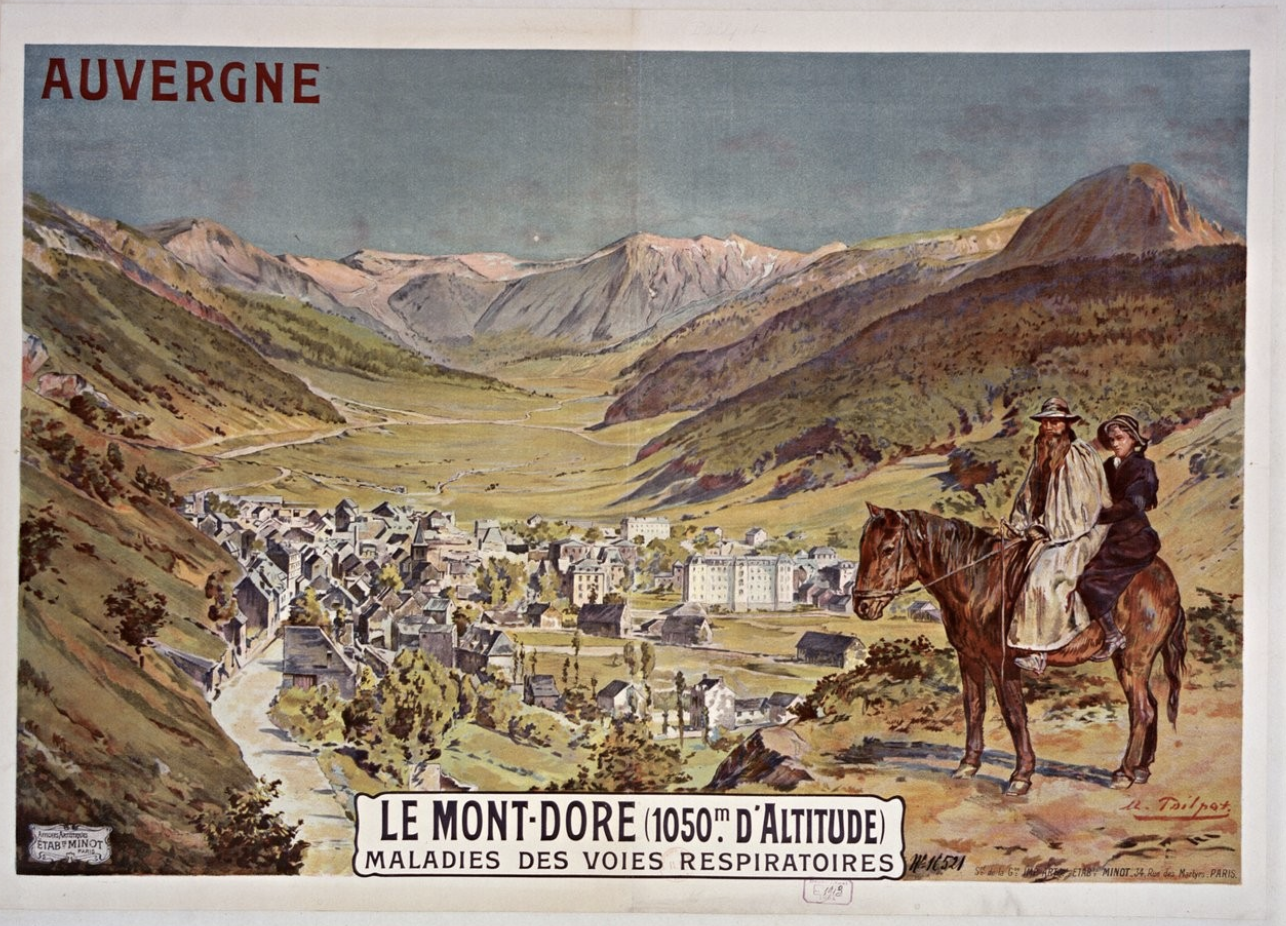 The largest hotel in Le Mont-Dore, Hotel Metropole, turned out to be closed. In the cold of a dark January night we peeped inside through the high revolving doors. On the door was a big sign’ ‘L’interieur de l’hôtel est à vendre’ and a phone number. In the large hotel lobby, we saw a hotchpotch from the inventory but our eyes got caught by the large cast-iron bathtubs that stood in the lobby in rows of three. The most beautiful antique tubes we ever laid eyes on. And there were many. 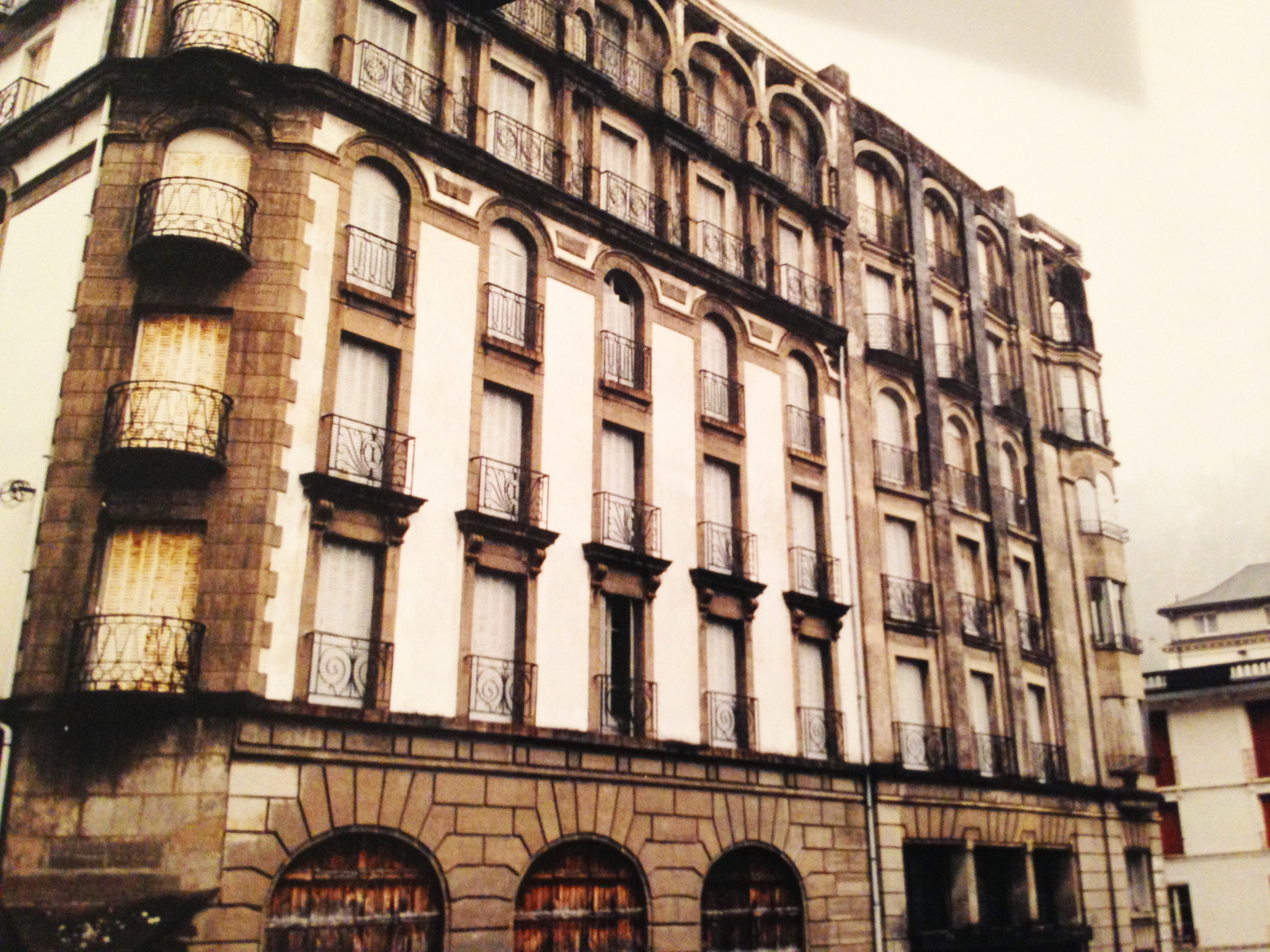 The municipality had expropriated the hotel because they wanted to change this beautiful authentic resort – that even had its own underground connection to the thermal bathes – into a congress center.  The owner fought tooth and nail against this decision. Together with her old mother she moved into one of the rooms of the hotel, deprived of gas, water and light, to prevent the demolition of the hotel.

To survive the owner decided to sell the whole inventory, starting with the wine cellar – that went quickly – ending with all the furniture, including the baths and basins. All the sanitary appliances were once bought by the father of the owner (he was a ‘grand hotelier’ and at some time the owner of the Hotel Casino in St. Malô) at the Firm Jacob Delafon. Everything was of the best quality and extremely well kept. Beautiful bathes with complicated tab systems, basins on Roman columns, basins to hang with towel racks, bidets and many, many accessories. The bathrooms in the Métropole Hotel must once have been a true attraction. 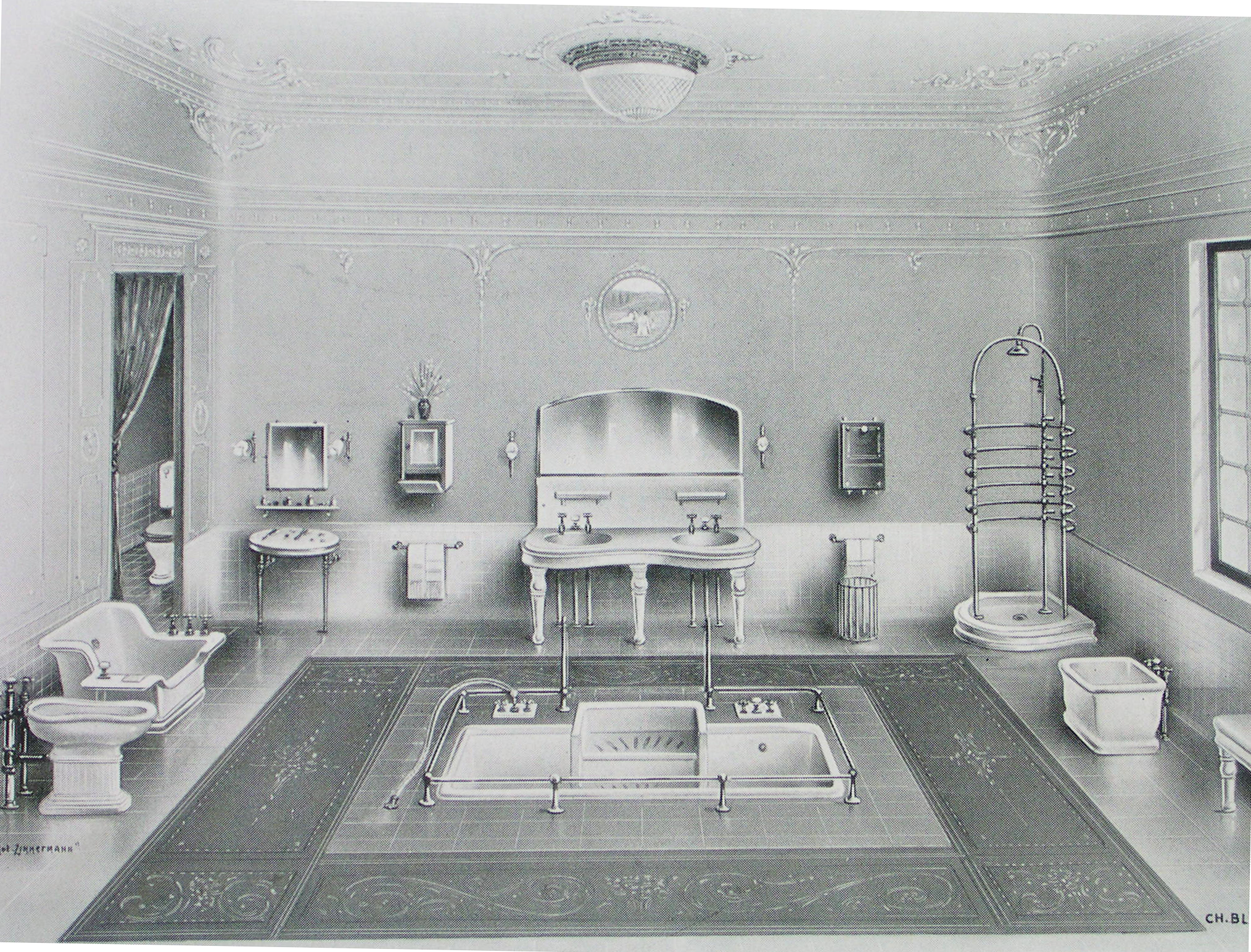 We bought all these beauties and we transported everything to our storage in the Netherlands. It now was a necessity to open a store, the stock was too big for a garage sale and more importantly, too beautiful and too special. In 1993 Affaire d’Eau started a small store in a beautiful place on the Geldersekade in Amsterdam. It had to be a water business, Affaire d’Eau.

In the years that followed we went on many adventurous trips looking for bathroom appliances from bygone days. Our travels took us from manors to stately city houses, from abandoned monasteries to fire stations and again and again we met special people in special places where time stood still. Like the manor that once belonged to one of the directors of the porcelain factories in Limoges. The bath of the master of the house with a gold painted monogram still stood in the original bathroom. 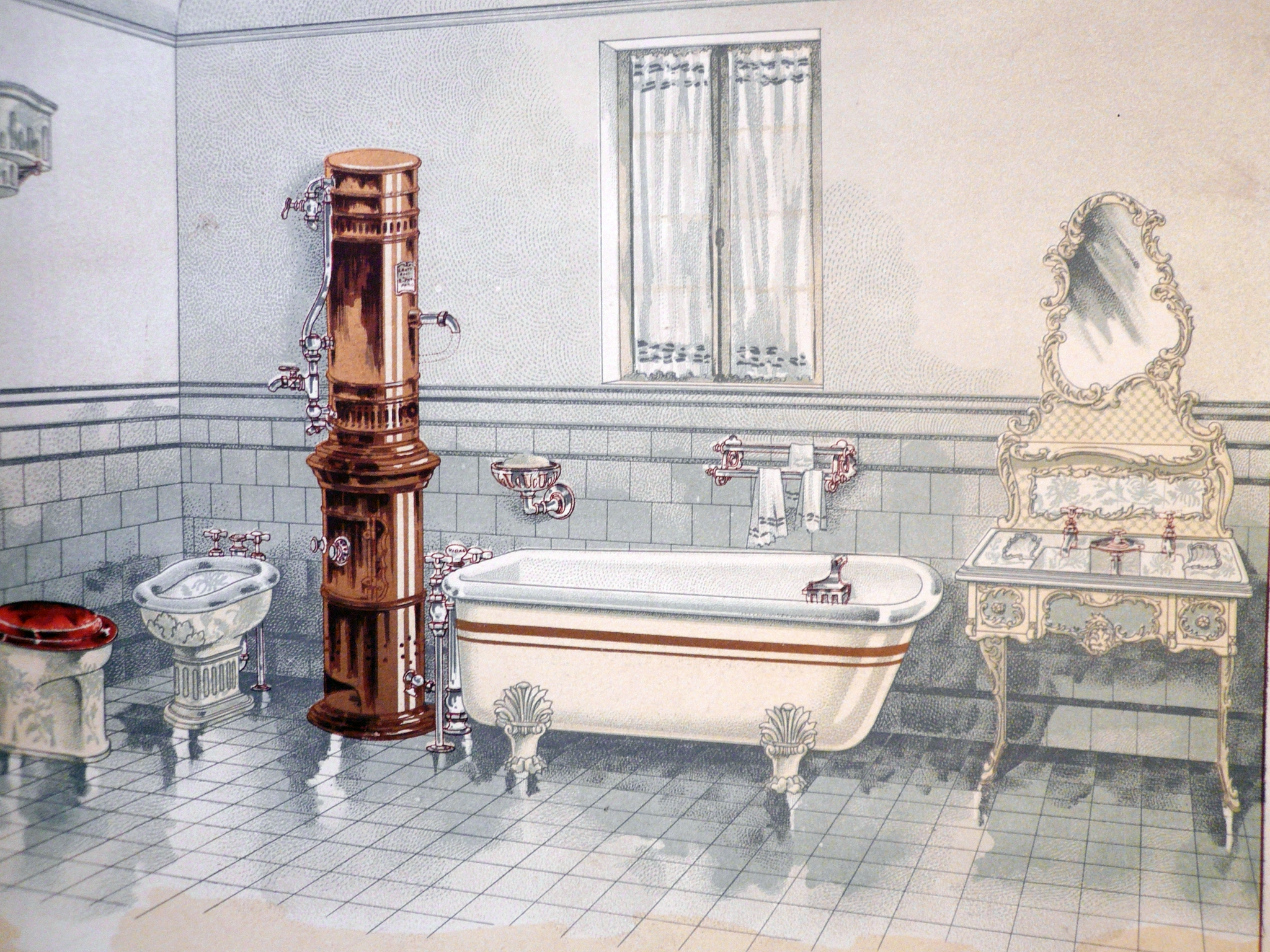 The spooky mansion, south of Cahors, where a jaggy building contractor took us on a dark night, telling us this house once belonged to a famous Paris notary whose customers were mainly French revue stars from the twenties like Mistinguette and Maurice Chevalier. He took us through the dark corridors to the bedroom where Chevalier used to stay in summer and the adjoined bathroom where he must have bathed. We took the bath with us and it’s now somewhere in Haarlem.

The monastery turned crèche near Lourdes where the bathroom of the abbot and the simple bathrooms of the monks were being demolished. The abbot’s bathtub was the biggest obviously, the monks bathes smaller but impressive all the same.

In 2018 Affaire d’Eau has been around for exactly 25 years and still the antique bathroom appliances, the antique bathes, basins on a column, cloak-room basins and the many antique bathroom accessories form the heart of our collection. We continue our search for beautiful bathroom equipment with undiminished enthusiasm, both in and outside Europa. The search for ‘forgotten antiques’, objects of which we sometimes don’t even know their function, things that easily end up in a corner or on the garbage dump.

We still try to find the provenance of the objects in the shop. It appeals to the imagination when you know a bathtub comes from a mansion on the main square of St. Quetin where the First World War passed through. Or when a basin on a frame comes from a stately home in Cheaumont where ‘L’Etat Major’ of the US army had their headquarters in the First World War. Or when, last but not least, a rare porcelain bathtub comes out of a Jugendstil villa in Rostock. It’s mind-blowing to realize that such a bath survived both the First and Second World War and in the end also the Russian soldiers that were posted there in the East-German period and is now the eye catcher in a castle in Belgium.

All of this we try to collect in our shop, the most beautiful bathroom objects from the old days and their remarkable history. To preserve them for a while, preferably forever.